what hollywood will hopefully learn from bridesmaids

I'm kind of obsessed with the movie Bridesmaids right now. I never caught it in the theaters, so I bought it as soon as it came out., I knew I would like it and I'm already a big fan of Melissa McCarthy.  I have had it for about two weeks and I've watched it 4 times since then. It is a very funny, well rounded and well done film. I love the friendship of the main characters in the movie and all the bridesmaids are just perfection.

If I had seen it earlier I would have written a big entry like this one. Melissa McCarthy almost steals that movie and you're so happy whenever she is on screen.  She's the hero of the film, really. She's the one that comes through and wakes up the heroine. She is kick ass in every way. And I have totally known women kind of like her.

I think the main thing that needs to be said over and over again is that Bridesmaids is a movie with three fat characters (two are smaller rolls - the roommate and a stewardess - yes, a fat stewardess!) and there are virtually no fat jokes in the script - AND it was the blockbuster of the summer!!

Do you hear that Hollywood? Fat people were cast, were hilarious and were not used for cheap fat hating jokes - and the film was the biggest film of the summer!  Please, please learn from this. 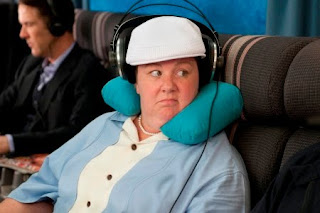 Some people might think there were some fat jokes in Bridesmaids, but they were small and subtle and and were in line with the characters. They weren't something I found offensive.

And then last week Melissa McCarthy does Saturday Night Live and kills it! I am so happy for her and her success.

I also secretly love that she has been smaller in the past, even losing quite a bit of weight at one time and yet when she really breaks through is when she's bigger. In fact, since she is so short, I don't really know if she could have been so good in the Bridesmaids roll is she'd been smaller. The character needed some physical heft to back up her personality.

I also watch her sitcom Mike and Molly where she pays a much more straight character. It's a good show, mostly. Her comic timing and reactions are just so good. Unfortunately, the mother played by Swoosie Kurtz is a mean-spirited fatphobic character and I find myself hating her and not wanting to watch Mike and Molly just for the way the mother character is written. But, my love for McCarthy wins out. She won an Emmy this year over some amazing people for her performance in the sitcom!

It is nice - finally - to have a movie like Bridesmaids prove what many of us have all been saying over the years. Fat jokes are cheap and easy and not needed for a quality film - or even a blockbuster film. Please folks, learn from Bridesmaids.

Posted by PonyBoy Press at 3:32 PM

I didn't know about McCarthy before Bridesmaids but her character was easily one of my favorite things about the movie. It was so awesome to see a fat character where the focus isn't just about his/her fatness. Loved it.

Isn't she just adorable? I loved Bridesmaids and got a kick out of the guy she was flirting with on the plane (and in the bedroom with at the end) when I found out that he is really her husband in real life!