I have had this book Scrapbooks - An American History by Jessica Helfand from the library for a criminally long time. Well, not really criminal - I do have it legally. The thing is the book can continue to be checked out because no one else has a hold on it. That's the criminal part - the fact that no one else has put it on hold for so very long.

This is a really amazing book. Anyone who is into vintage stuff, ephemera, true scrapbooking, design, journaling or zines would be interested. The images are beautiful and so intriguing and the story of scrapbooking and how it has changed over the years was fascinating.

The book has a website, The Daily Scrapbook, with a blog where they post many more scrapbook pages not shown in the book and lots more. Take a visit.

Also, I wrote a bit more about the book and the Victorian scrapbook last year on The Cedar Chest.

So, now I have written the blog post I have been meaning to for quite a while. I will now be returning Scrapbooks to the library. Go ahead and put it on hold for yourself. Or buy a copy. It's a great gift!
Posted by PonyBoy Press at 6:28 PM 2 comments: Links to this post birthday printable party pack by 1frogprincecreative
Etsy started 5 years ago today! What did we do without it? Etsy has made selling and buying handmade good so much easier! Probably 80 percent of the gifts I get are bought on Etsy. I love being able to find handcrafted items and being able to talk directly to the crafter. I have had a number of custom items made on Etsy, well.

I have never been a huge seller. I am strictly a hobbyist, a part-timer. But, I am a committed hobbyist! I joined Etsy on June 22 2005! Only 3 days after they opened! I didn't even realize how early on I became a seller until right now. I thought it had been around for at least a few weeks when I joined. Internet time is so much faster than real time.

When I say I am committed, it's for real. I continuously praise Etsy, and tell everyone to shop there if they are searching for something. I have told many crafters and vintage sellers about it, too. And of course. I also have three Etsy shops. That's love.

Here is a horrible 2005 photo of the first item I sold on Etsy. A pocket mirror. I sold it on June 23rd. 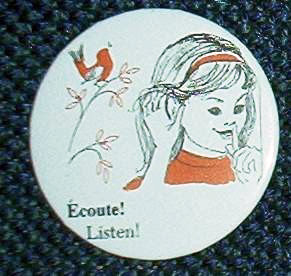 So, Happy 5th Birthday Etsy! Thanks for being an awesome website with reasonable fees and a great interface. Here's to many many more!
Posted by PonyBoy Press at 5:59 PM 1 comment: Links to this post

Labels: about me, etsy finds

thoughts for your day seen many places. Orignal is here.
Posted by PonyBoy Press at 1:51 PM No comments: Links to this post

a trip back to the the cuckoo's nest

Last week I was reading some of my blogs, truthfully, skimming them, and I got pulled into one of the best things I have read on a blog in a long time. It was a new blog to me, suggested by another blog, but the suggestion had nothing to do with the post.

The blog Violet Folklore told a story about a boutique that started in Portland in 1969 and lasted through the mid Seventies. They made and reconstructed clothes from recycled fabrics and only used natural fibers. The story was also about the connection formed between the owner of the Old Portland store called The Cuckoo's Nest and the vintage clothes seller Violet Folklore. Their aesthetic and intent is similar. Through conversations and images Julie from The Cuckoo's Nest told her story of the unique store and Portland in the 70's and so much about vintage diy boutique fashion.

It was such a fascinating read. I loved all the images in the post and I am looking to more of the inside of the store that will be posted. The images that are shot for the Violet Folklore store are very similar and the connection between these two women seems strong.

Here are some images from the very image heavy blog post. I encourage you to read the post.

This is an original dress from The Cuckoo's Nest that the owners daughter is modeling. So beautiful!

You know, I was just a kid, but I miss the 70's. These pictures make me nostalgic for a place I never even went to. But, I went to places kind of like that in Ventura and Ojai when I was a kid and I remember the feeling they left in me - the dreamy longing to be a long haired prairie girl, making candles and living in a log cabin. I was sure adulthood would be like that.
Posted by PonyBoy Press at 8:34 PM No comments: Links to this post

what are you doing for national iced tea month?

An email from a tea merchant tipped me off that June is National Iced Tea month. So, this gave me the excuse to right about Iced Tea again. Isn't that the point of these National Whatever Months? No prob, I am happy to oblige.

I like tea. Like most people, in the summer I like it iced. last year I wrote about my "iced tea plan" and making concentrated batches. Although I like to mix and make my own versions of iced tea, I usually use bags. The purists out there might have a problem with that, but it makes it easier. My favorite is still the Midsummers Peach from Harney and Sons. I also like to mix different teas all the time, some combos are great. A little peppermint tea is always nice to add in a mix.

Apparently Iced Tea has only been around in America a little over 100 years. It was introduced in St Louis in 1904 at the Worlds Fair. 80% of the tea consumed in the states is consumed cold. That is pretty surprising to me.

Since it hasn't been that hot yet this summer in Portland I have only made a couple batches of iced tea. I made some today and enjoyed it with some cupcakes I made yesterday. They have roses on them in honor of The Portland Rose Festival (I got them from Bake it Pretty, of course). Last night was the Starlight Parade and we watched it from the comfortable and uncrowded living room (it is televised locally) and had some cupcakes. Yeah, I have a rather low key way of celebrating things. So, go make some iced tea. And let me know what your favorite kinds are.
Posted by PonyBoy Press at 4:51 PM No comments: Links to this post

Not sure what this is? Here is the lowdown and the last 10 months of the series.
Posted by PonyBoy Press at 3:18 PM No comments: Links to this post