I have always been intimidated to make pie crust. If I make a pie I usually buy the pre-made pie crusts. But, the other night I made two mini apple pies for me and the mister. I didn't even think about the fact that I had made pie crust until it was done. I think the fact that they were little and I could just patch it together made it a lot less intimidating. 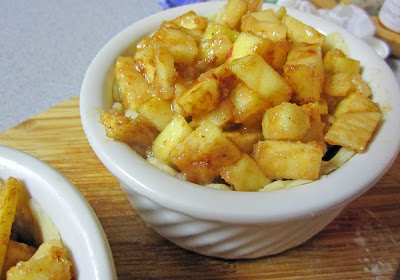 I used this recipe. But, instead of making them in muffin tins I used ramekins, which are bigger. I then halved the recipe (because I was only using 2 ramekins). It turned out real good, but I needed to pack more apples in. They cooked down and we definitely needed more ( I used 2 medium and one small). The baking time was a bit longer in the ramekins. 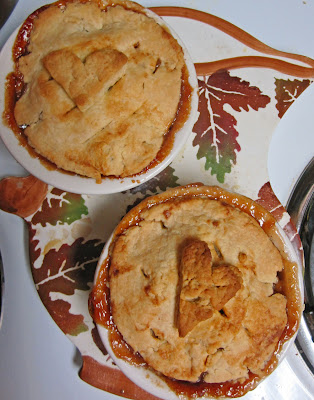 I had a hard time getting the pie crust to not break up. Let me know if you have any tips on that. In general this was a really easy recipe and pretty fast - and no pie crust pressure!

There are so many apple recipes on Pinterest right now! If you are wondering what to make this weekend or for Thanksgiving, check them out. You can start on my Food and Drink Board, which has a lot of them listed, including the one I used here.

Posted by PonyBoy Press at 2:40 PM

That sounds SOOO yummy. I am kind of intimidated by pie crust too. I've made this cobbler a few times which has a really easy crust/top method that I liked a lot: http://www.thekitchn.com/thekitchn/ingredients-fruit/recipe-easy-foolproof-cobbler-for-any-fruit-054973