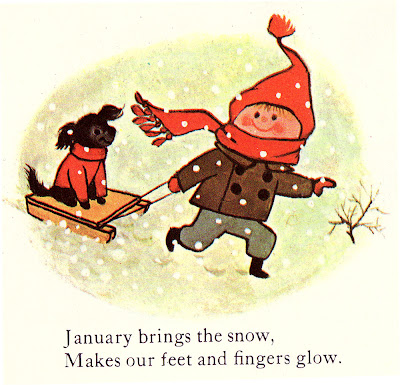 This illustration is from A Child's Book of Poems from 1969. The illustrator is Gyo Fujkawa.  I was given this book as a little kid along with A Child's Garden of Verse illustrated by Fujikawa as well. They were given to me by a man who worked with my dad making educational films.

I loved these books. Loved looking at the pictures and later when I could read, reading the poems. The images and style was really influential to me, which I didn't realize until 30 years later.

There are lots of poems in A Child's Book of Poems about the seasons. Many mention the things you do in winter, spring and fall and most of these things were completely foreign to me. I was growing up in suburban Southern California. There was no snow or ice skating (unless we drove 2 hours to Topanga Ice Rink). There was no nut gathering in fall or long awaited tulips in the spring. I don't even remember that many trees with fall colors.

I longed for these signs of the seasons, especially winter, since that seemed the most foreign to me. Building a snowman in your own yard! Incredible. 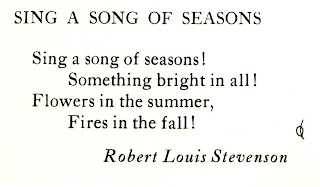 In my Southern California upbringing we would "go to the snow". Dad would announce, "Does anyone want to go to the snow today" And my sister and I would hunt down our seldom used scarfs and gloves (mainly brought out for birthday parties in Topanga) and we'd all drive for about an hour or more out to the mountains above Ojai.

Snow was something you went to, not something that came to you. At that young age I became sort of entranced and awed by these neat happenings that came along with the seasons. I still am. I love anything to do with seasonal things and winter is my favorite.

I moved further north at 18 and further more at 36. I wanted more seasons. Portland is pretty good when it comes to seasons. You get the feeling of each season without extremes.  This year the winter has been very different - dry and sunny. It's been nice. I love sunny cold days, but it isn't normal and it feels more like March than January. The plants have begun to bloom even, thinking spring is on the way.

Today it's raining and I'm loving the sound. I have the windows open so I can hear and smell it better. I did miss the rain. Tomorrow it may snow! Still so excited when I look out the window and snow is falling.

I love the winter more each year. The quiet of January and February. The bare trees and crisp air. I think this year I will finally do my winter zine. I hope you're enjoying January, too. 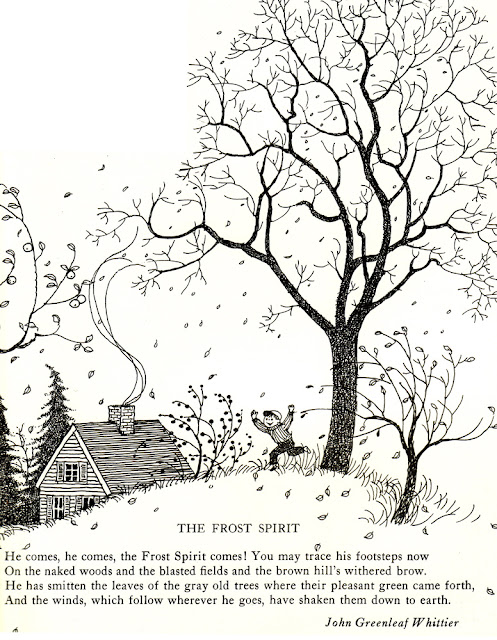 Posted by PonyBoy Press at 2:35 PM

Labels: about me, seasons