Although it's still almost a full month before summer is officially over, I'm seeing a bit of fall peeking out and sneaking into view. The air feels and smells a bit different and the light is different. I know though that we will most likely still have hot weather for another month. In this area the hot weather goes through the end of September usually.

Still it definitely feels like the end of summer. Before the heat wave last week I found 2 huge zucchinis. I look everyday, but someone had missed these. It seems impossible. I decided to make some zucchini relish with them. Something I'd never made or had before.

I found an easy recipe in a zine I'd gotten just a couple of days earlier at The Portland Zine Symposium.  The zine is Keeper's Kanzine and I highly recommend it. Not only is it a beautiful zine (I love the cover) but it has some great recipes and some great advice.

I got it from Ms Valerie Park Distro and you can get it there, too. There is second edition as well.  It was in this zine that I learned that I can put jars in the oven to sterilize. I've always been really put off by the whole sterilization process, kind of intimidated by it, so I loved this idea.

The recipe was called Golden Relish and it turned out great.  I wasn't sure how I'd like it, so I made a half batch. It's really good. If you like sweet relish you'll like it. I've had it on a sandwich a lot in the last two weeks. 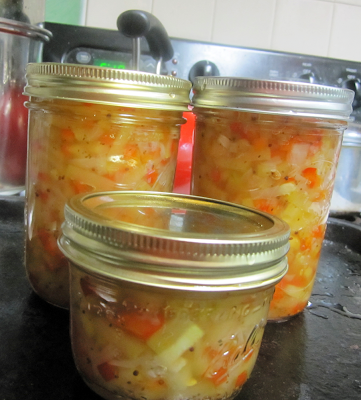 Here is a picture of it right after I canned it. Today I made another half batch and I used a yellow pepper instead of red and put in less sugar. I want to see how it will be with less. Since I used the naturally sweet Walla Walla Onions I think it could use less sugar. I'm excited to try it.

The heat wave kind of burnt up my plants. I don't know if I will get much more harvest from them. I didn't get many cucumbers this year because the zucchini took over. Which sucks. I kind of like the process of having too much of something and finding a way to use it, and zukes are the best for that. But I want more cucumbers, so next year I may not plant the zucchinis.

Anyway, I'll leave you with this pretty picture I took on my phone Friday while I sat on the porch swing with my mom. My step-dad was working in the garden and he had handed her some roses. It was a lovely perfect breezy summer day. The air felt so soft and friendly. 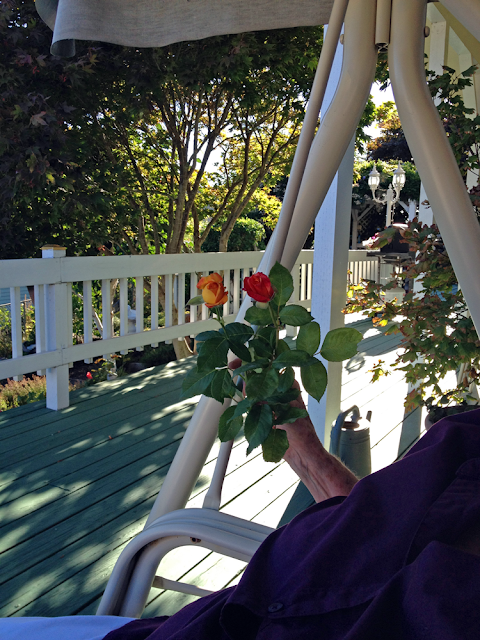 Posted by PonyBoy Press at 4:20 PM

Labels: about me, food, zines