October in the Railroad Earth 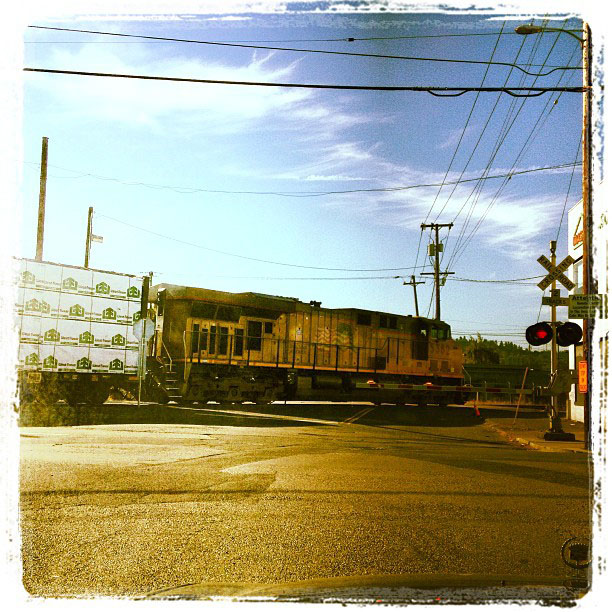 Stopped at the train tracks today on a golden October afternoon. I took pictures of the train and immediately thought of the Kerouac prose piece October in the Railroad Earth.

It's about his days working on the railroad in San Francisco, which he often calls Frisco (I think he was the last person allowed to call it Frisco). His time on the railroads didn't really last too long, like most of the stuff he did, but, like a good writer, he got lots of material out of it.

THERE WAS A LITTLE ALLEY IN SAN FRANCISCO back of the Southern Pacific station at Third and Townsend in redbrick of drowsy lazy afternoons with everybody at work in offices in the air you feel the impending rush of their commuter frenzy as soon they'll be charging en masse from Market and Sansome buildings on foot and in buses and all well-dressed thru workingman Frisco of Walkup ?? truck drivers and even the poor grime-bemarked Third Street of lost bums even Negroes so hopeless and long left East and meanings of responsibility and try that now all they do is stand there spit- ting in the broken glass sometimes fifty in one afternoon against one wall at Third and Howard and here's all these Millbrae and San Carlos neat-necktied producers and commuters of America and Steel civilization rushing by with San Francisco Chronicles and green Call-Bulletins not even enough time to be disdainful, they've got to catch 130, 132, 134, 136 all the way up to 146 till the time of evening supper in homes of the railroad earth when high in the sky the magic stars ride above the following hotshot freight trains-it's all in California, it's all a sea, I swim out of it in afternoons of sun hot meditation in my jeans with head on handkerchief on brakeman's lantern or (if not working) on book, I look up at blue sky of perfect lostpurity and feel the warp of wood of old America beneath me and have insane conversations with Negroes in several-story windows above and everything is pouring in, the switching moves of boxcars in that little alley which is so much like the alleys of Lowell and I hear far off in the sense of coming night that engine calling our mountains.

I've had Kerouac and the Beats in my head because I am currently cleaning out my storage unit and I have boxes filled with many books on Kerouac and the Beat Generation writers. Most of them were bought in the Bay area in the 80's and 90's. I am selling some on The Cedar Chest shop right now and will probably list more soon.

I remember one night around 1995. I had been reading Carolyn Cassady's memoir of her time with Neal and Jack (It's called Off the Road and I remember it being one of the best books I'd read about that time) and one night I had a particularly vivid dream that I was there in that apartment hanging out all night with Jack, Carolyn and Neal, drinking, dancing and taking pictures. The one scene I remember the most was Jack sitting on the floor cross legged (I was standing up looking down at him) in a light blue-grey sweatshirt and he just wouldn't shut up. He was really obnoxious.

Posted by PonyBoy Press at 5:01 PM

Um... I want your beat stuff!! Even though I have him tattooed on me I find him irritating at times but I still love him.