New Crafty Item in Shop - "You're so good lookin'" 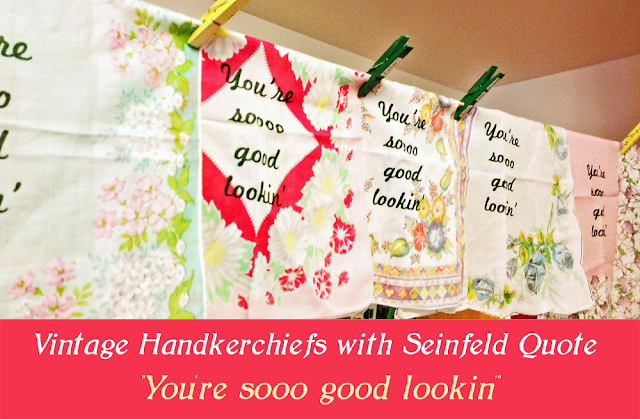 I've had this project in mind for almost a year now and I finally did it. It was fun to break out the gocco printer again. If you're not clear on why these hankies have this saying on it, let me me explain.

In a Seinfeld episode called "The Good Samaritan" George gets in some trouble for saying "God bless you" to a married woman who sneezes. While they are discussing it, Jerry says

"If you want to make a person feel better after they sneeze, you shouldn't say 'God bless you.' You should say 'You're so good looking!'"

So, with this episode in mind (Um, yeah, I watch a lot of old sitcoms) I did some printing on these vintage handkerchiefs. It's a great inside joke for any Seinfeld friend and just a nice compliment for anyone. They can keep in their pocket or hang on the wall. Many of the hankies are so pretty it's a shame to hide them. You can find them in the shop now.

I hope you all like them, too. It's been so long since I've made a craft to sell, I'm nervous about it!

Not that there's anything wrong with that.

Posted by PonyBoy Press at 2:13 PM