I am not sure what I have been doing, but it is nothing of note. I just now put up the new Invisible Summer calendar for 2009. I guess I am trying to get it together, but it feels difficult. 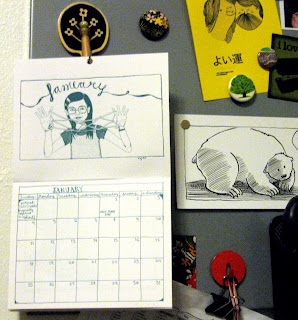 I can tell you some things I have been doing. I have been watching a lot of British TV, including re-watching all my French and Saunders dvds. I watched one hideous movie called Mamma Mia and I have been listening to Coconut Records.

I have been listening to them on Pandora and myspace for a while and never really investigated them. Turns out it is Jason Schawartzman and boy, did I feel like a fool. But, actually, I am glad it worked out that way, because I am a fan of his, so I would have been listening to the music with a bias. The first record has the incredibly infectious song West Coast. (I know, I am really late on this one, forgive me). His new record comes out on Jan 20th and you can hear it all on myspace. A lot of it really reminds me of John Lennon's pop music, especially the later years. It is pretty different from the first one. I like the second one better over all. [edit: Oh, I just realized the other influence I hear is Emitt Rhodes. And I remember Wes Anderson saying that JS was the one who introduced him to ER]

I keep threatening the craft den that I am going to clean it up, but so far I haven't. It is nice not to have deadlines for a while.
Posted by PonyBoy Press at 9:50 PM