when being a General Hospital watcher pays off

This post requires that I admit to you that I am a day-time soap opera watcher. I have tuned into General Hospital off and on since I was a little kid. I would watch it with my Mom and then later I would catch it in the summer, during sick days, in the University TV room between college classes and on my days off from work. Around 15 years ago I started taping it and I watch it fairly regularly. Sometimes I get too behind and just delete weeks of episodes and sometimes I just get bored. But, I always come back and over the years my friends have often wondered why.

There are many reasons, but I will keep it simple and give you the short answer. I have followed these characters for 30 years. Many of the roles are still played by the same people. Where else can you see a character age and change over real time?

Okay, I know that seems like an odd statement when age is never mentioned on soap operas and eight year old kids go to camp and come back 4 weeks later as troublesome 15 year old delinquents. However, it still is more true on soaps than anywhere else. I mean, can you imagine watching a show where the character and the original actress is 55 years old and you remember when she was the hot new nurse in town and had all the juicy storylines? When those old characters talk to each other there is real history there. When Luke talks to his son Lucky about when he was a kid, it is not made up. He worked with him when he was 11 years old and he works with him now that he is grown and has kids.

Anyway, that is just one of the reasons that I enjoy soap operas. There are other reasons I think soaps are good and there are lots of ways that I think they are bad - which I also find very entertaining. Like, how one night will last a month of shows and then the next day it is a whole new season, or the way dead characters come back to life so often or the way the writing and sets are so half-assed sometimes. I enjoy the badness of these things just as much as the good stuff. My favorite is when they are at "the park" like on the grass during a picnic or something and you can hear the women's heels clicking on the cement floor.

So all of this is just a introduction to tell you that the next few weeks is the pay off for all my General Hospital watching. James Franco is playing a role on GH for several weeks.

James Franco was in Freaks and Geeks, Milk, Spiderman, Pineapple Express. He is a big movie star. He chose to be on GH for the challenge and for research. I think it is so awesome that he is doing this. Soaps get a bad rap and he is bringing a little bit of respect to them. I know they seem silly to people who don't watch, but they are kind of like SciFi or Mystery shows. You need to understand the "language" a bit to appreciate them.

GH has pulled out all the stops for him, too. The sets involved in his storyline have been better and more believable and I am excited to watch it. Having watched Freaks and Geeks a few times I feel a familiarity with Franco, so it is neat to see him on another show I am so familiar with - although it is strange, too - kind of like hearing your best friend suddenly speak fluent French when you didn't even know she knew the language.

I decided that if I was ever going to write a blog post and out myself as a General Hospital watcher that this was the time to do it. Any others out there?

There is more about his decision in this article. 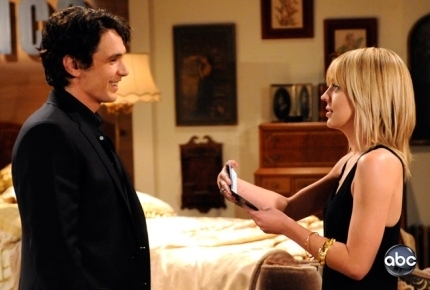 I used to watch Days of our Lives, but lost track of it years ago. That said, I still get where you're coming from in terms of the special kind of longevity and history that only exists on these shows, where actors have been playing the same character for decades! And not off-and-on, like in a movie series, but every single day!

My first reaction to the James Franco/GH news was "WTF?" but now I get it. And it makes me love him more for his desire to mess with the industry conventions for what an actor like him should be doing.

I know, totally. It makes me love him even more. Most people would be like, I am a star, I will just observe a soap. But, to actually DO it is so awesome.