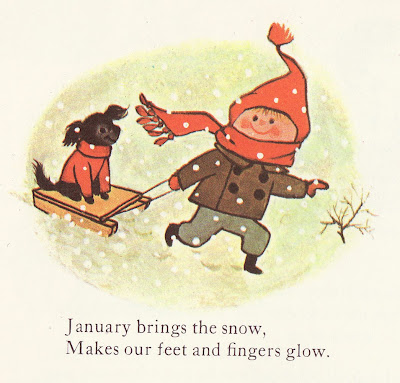 When was a bout 6 or so, a man who worked with my father making educational films gave me two books, A Child's Garden of Verses and A Child's Book of Poems. Both were illustrated by Gyo Fujikawa.

These books had a big impact on me, although I didn't notice it till many years later. The illustrations were so beautiful. Many of the poems dealt with seasonal things. There were lots of winter poems about the joys of skating and snow and cold and coming in from the cold. The images with them were so enchanting and charming.

But, they confused me a bit and made it clear to me that I was missing out on a lot of neat stuff living in Southern California. January didn't mean snowmen to me. I never needed to bundle up to do anything. And except for a few vacations, I wore my scarves and gloves mainly to go to the ice skating parties at the indoor rinks.

I also noted that there was supposed to be lots of rain in April, winds in March and other people had lots of leaves to rake up and burn in fall. The whole seasons thing captivated me and that has never really gone away.

I think these illustrations were the first thing that really affected my desire to move North and have more weather. I love that in Portland we have true seasons without it getting too out of control. Gyo Fujikawa was a American born Japanese woman. She was born in Berkeley, California and she did some work for Disney in the early years. She was one of the first illustrators to get royalties from books instead of just a flat fee.

She was interned with her family during World War II where she continued to do advertising layouts. She never married or had children. She died at 90 in 1998.

A lot of the prettiest pages in the books I have are on both pages. I scanned these two to share with you in honor of yesterday being the first day of spring. Click through to the flickr page to see the bigger size. Posted by PonyBoy Press at 6:27 PM