I have been wanting to actually use my cookbooks lately. I tend to make the same things or just make up stuff. I think I was inspired by this post on the Not Martha Blog. She and a group of friends have a cookbook club and the feast they had from the book they chose this time not only made me want to use my cookbooks, but also encouraged me to buy yet another cookbook. So, I thought I better start using all these recipes I have been collecting! Isn't a cookbook club a great idea? I loved that post and all the food looked so good!

Lat weekend I was invited to a brunch potluck. I decided to make the Cheddar and Black Pepper Biscuits I saw on the blog Joy the Baker a couple months ago. I made them smaller than regular biscuits since I knew there would be lots of food and people may not want a large biscuit.

They were really good, more like scones I thought. With butter, they were the best, but also good plain, too. 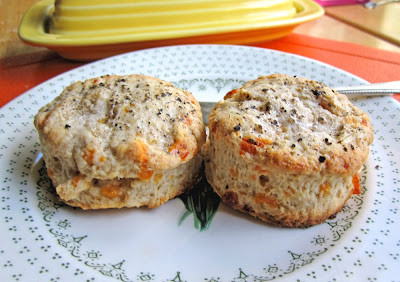 Last night I made something that was called Farmers Market Spinach Cannelloni from the cookbook Foods to Live By published by the people behind Earthbound Farms (they have lots of recipes on the website, but not this one). It had lots of steps, but was still pretty easy. I easily get intimidated by recipes, so if I did it you can bet it wasn't too complicated.

The recipe didn't call for cannelloni shells, but just rolled up lasagna noodles. It was quite tasty and something you can easily make in advance or freeze for later. 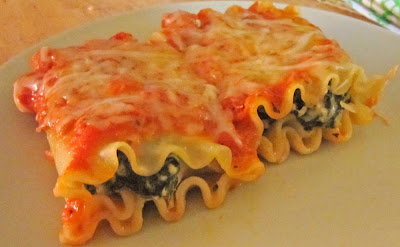 It was fun to put together while the mister and I watched a old movie. I am excited to make some more new things. Do you use your cookbooks or just collect them. They are entrancing aren't they?
Posted by PonyBoy Press at 5:06 PM

yummm... i love those the lasagna noodles add a cool touch. im getting hungry!