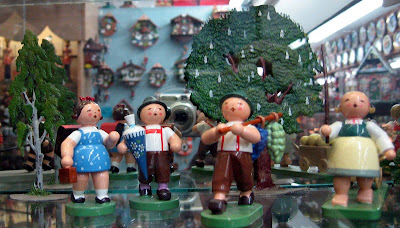 It's Oktoberfest time! It seems that what everyone loves about Oktoberfest celebrations is the crowded parties, the massive drinking, the dancing and the meat.

I love Oktoberfest and yet I don't really like any of those things. Don't get me wrong, I love a good beer or two, but since they mostly make me want to curl up on the coach or take a nap, dancing around to loud music with a crowd of people is not something I'm probably going to do - drunk or not.

Another main reason I don't go to Oktoberfest celebrations is that I don't eat meat. It is pretty hard to find a veggie sausage at a German celebration. I don't really understand why, either. It would be so easy to just offer veggies sausages.

When the mister and I were in the Bavarian themed town of Leavenworth, Washington a few years ago they had one place that had veggie sausages. We ate there twice. I absolutely love a veggie sausage with mustard and sauerkraut! 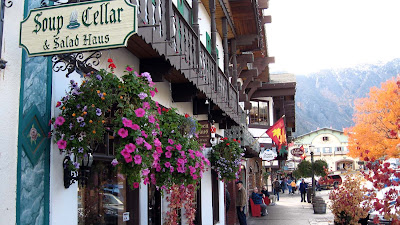 Most German food, like Potato salad and other things, also has pork in it. So, that leaves that out for me, too. What's a German food loving veggie to do?

Put on your own Oktoberfest! 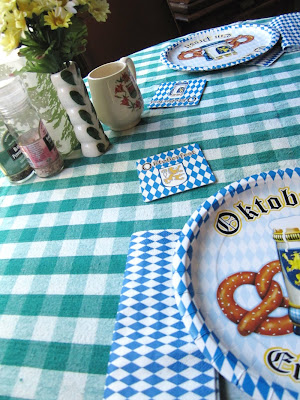 Mine is just for the mister and me. It features veggie sausages in buns with the toppings, German potato salad (I've made it in the crock pot before, mostly just potatoes and vinegar - good!), pretzels (can be made or bought from the local German Bakery), cucumbers in vinegar or salad, pickles and good German beer.

You can get Oktoberfest decorations from the local party store. I try and make the table look like a table in a bier garten. The final touch is some good old fashioned German music. I just find some on the internet and play it over the laptop.

This may seem pretty dorky to you - and it is - but we like it.

It reminds me of being in Leavenworth, which I loved. And it is a fun way to celebrate Oktoberfest without all the other stuff that although can sometimes sound fun - is just not really my style most of the time. I do love the German music and the Bavarian aesthetic. Maybe someday someone will start offering more veggie items at Oktoberfest celebrations.

Whether you are celebrating big or small - Happy Oktoberfest and welcome Autumn! 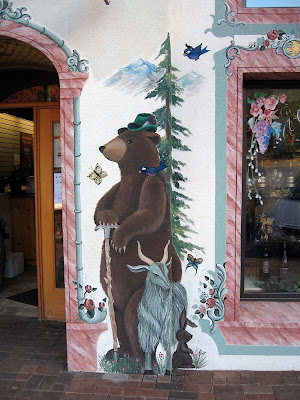 Posted by PonyBoy Press at 4:07 PM

i love oktoberfest!! i lived in wyoming for awhile a long time ago, and that was the only good thing about it. i don't think it's dorky, but i love dorky anyway! you made me smile!xx