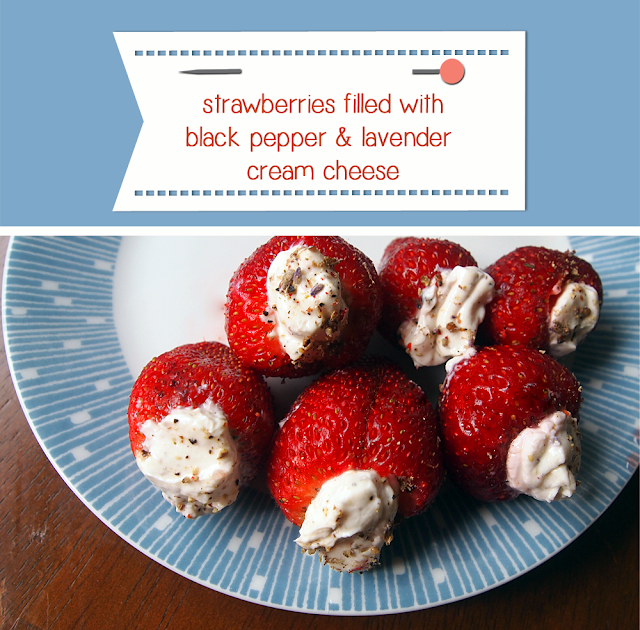 Last week I was invited to a delicious brunch by my friend and charming blogger Sarah from New Wave Domesticity.  I am recently having to eat Gluten Free because of an auto immune disease I had just found out about. Sarah happily took on the challenge of a Gluten Free Brunch which was so awesome. It was delicious! Check her blog for the recipes she made.

I wanted to bring something, but I've been sort of stumped about what to make with the whole gluten thing  being an issue. I had strawberries and cream cheese in my fridge and I remembered seeing a recipe on Pinterest with cream cheese stuffed strawberries. But, I wanted it to be more interesting than that.

It came to me immediately how to jazz it up, because just the day before I had been at The Observatory here in Portland for the first time and had two fabulous Strawberry Black Pepper Cocktails (strawberry puree, vodka, black peppercorn syrup with a salt and pink peppercorn rim - so good!). But, to make it even more interesting I used the  Lavender and Black Peppercorns in my grinder and then added even more pepper.

I don't have an exact recipe, but used about 3/4 cup cream cheese, 2 tablespoons honey, and just ground the pepper and lavender combo & then the black pepper until it looked like how I wanted. I then mixed it all together and put it in a pastry bag (and like an idiot forgot the nozzle, so that's why these are not as pretty as they could be - can you tell I don't use my pastry bags that often?). I then did a little sprinkle over them with the Lavender Pepper.

These were pretty darn delicious - refreshing and creamy, but then they had this complexity with the pepper and the subtle lavender flavor. I recommend the combo. Also, I made them the day ahead and then covered and put them in the fridge and they were just the same a day later as they were when I made them. Just remember to kind of let the strawberries dry a bit or pat dry after rinsing. I love strawberry season!
Posted by PonyBoy Press at 5:06 PM

These look so pretty! I'm not a big fan of cream cheese but I bet if I could figure out some alternative, they would be just as good!

Thanks, Jen. Yeah, I haven't been a big cream cheese fan in the past, but I am finding I like it recently more. For me the lighter cream cheese is better. You could also try goat cheese though.