Whatever Watermelon Salad and my Kitchen Confession 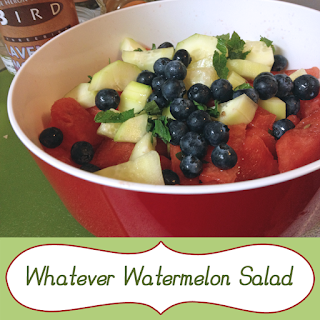 I am the kind of person who doesn't read instructions much. I like to get in there and just figure it out. Sometimes this works great. Lots of times it doesn't.  I'm kind of like that with cooking, too. With baking I'm more careful (but not by much). I have a bit of a devil-may-care attitude about cooking - especially if it's just for myself. I collect recipes on Pinterest and have many cookbooks and yet, when it comes down to it I usually just make something up.

So, yesterday I got the idea to make a watermelon salad. I looked up some recipes on Pinterest, but none of them were really what I wanted to do. So, I just kind of did my own thing. I made a watermelon salad with cucumbers, blueberries and mint. I added some things to make a dressing and the result was really good. Here is a sort of roughed out idea of what I did (what, me measure?) so you can use it as a guide for your own whatever watermelon salad. 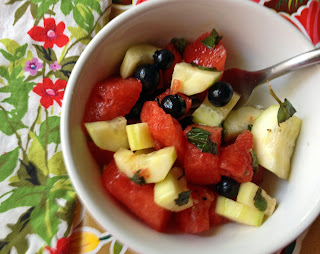 My version of Whatever Watermelon Salad

About 4 cups cut watermelon
1 cucumber, peeled and cut up
About 1/2 cup blueberries
Mint leaves, roughly chopped up (I used Lavender Mint from my garden)

1 tablespoon Olive Oil
1 tablespoon honey
1 tablespoon Lavender Lemongrass Vinegar.
( I know not everyone has this sitting around. But, I recommend trying something that would give it just a little bit of some unique little tang. This vinegar is perfect as a secret ingredient in things. It adds so much, but you can't quite put your finger on it.)
a pinch of salt and a little bit of pepper if that's your thing.
Whisk together and gently toss with the fruit salad

You can eat right away, but it's better if it sits for a bit. The second picture is the salad the next day.

Are you a perfect cook and stick to recipes or are you like me?  I'll call it creative (but I have also called it half-assed).

Labels: about me, food, recipes