Even though just hours ago I posted something about how I covet all the cutesy animal fabrics from Japan, I am now here posting about how there is the littlest inckling in me that is starting to not be as interested in them. Don't get me wrong, I love the animal stuff, I always will, but my bedroom is starting to look like a 6 year olds and I find that I don't feel quite as strong a pull for just anything cute. I am becoming more discerning.
At one time I had to get anything squirrel, now with so many squirrel things around, it isn't as important. In a completely contrary way I have become *more* entranced with owls then I once was, all the cute designs have influenced me in an opposite way. I think often my obsession for designs, or really, motifs has to do with the past. I am attracted to the motifs of the past. In the mid-nineties I looked for cherry designs, they were so popular in the forties and I thought it was so charming. As you can imagine, I was over the cherry thing a long time ago.

I could go on and on with this, but I don't want to offend any of you, because chances are there is some motif you really love that I am unexplicably over and I can be rather surly about it. As you can see I think about this stuff a lot. I notice the movement of motif from underground sort of indie land to more mainstream indie land to Urban Outfitters to Target to Walgreens. Case in point the little bird as a motif. That was something I saw as a new motif when I first moved here in 2000. I am not saying I don't still find things with birds on them appealing, I can, but it is 7 years now!
Anyway, the whole point of this post is that I often wonder what is next. At some point it is going to go the other way. What will be the designs that become the antidote to the ultra cutesiness of now ( by the way, the nature motifs have been a nice addition in the last few years, I personally have always loved the tree motif, but even these are very sweet and romantic and cute, so I am including them in this category). I have thought often that it could be buildings. I saw these recently on the blog Print and Pattern 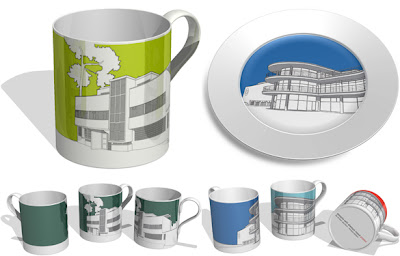 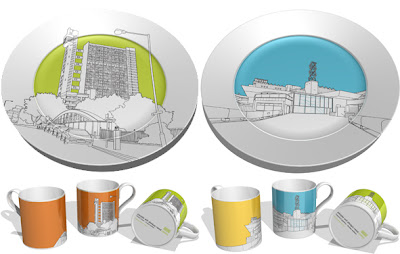 I really like them. I could see totally getting into this, in a way. Especially if they were buildings I knew. They have a sort of Seventies feel to them, which appeals to me, although I am not sure that they used buildings as a motif back then.
These do, however, go with a certain kind of metropolitan lifestyle and home. I think they are perfect for the modern looks of todays homes, I just do not have that kind of a place. But, anyway, buildings, yeah, look out for them.
p.s. this has been a entry in the making for years!
Posted by PonyBoy Press at 5:42 PM

Oh my gosh, Krissy! You totally called it on the building thing. I can see it becoming really popular, these are super cool, too.
Thanks for mentioning Chet in Dot, too!